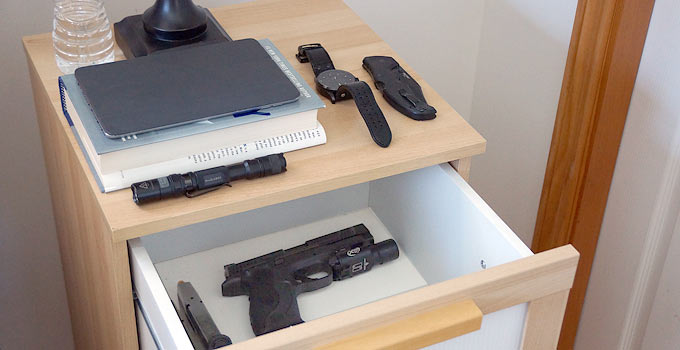 I can’t imagine a much worse scenario than being woken up at night by a noise in your house that an intruder is inside!

The overwhelming feeling that someone actually is breaking into your house or someone already inside your home will be a shock to your system.

Your heart will start pounding…

The amygdala, an area of the brain that contributes to emotional processing, will send a distress signal. The sympathetic nervous system (which functions like a gas pedal in a car) will respond.

Signals will be sent to the adrenal glands. These glands respond by pumping the hormone epinephrine (also known as adrenaline) into the bloodstream.

As epinephrine circulates through the body, it brings on a number of physiological changes:

– The heart beats faster than normal, pushing blood to the muscles, heart, and other vital organs.

– Small airways in the lungs open wide. This way, the lungs can take in as much oxygen as possible with each breath.

– Extra oxygen is sent to the brain, increasing alertness.

– Meanwhile, epinephrine triggers the release of blood sugar (glucose) and fats from temporary storage sites in the body. These nutrients flood into the bloodstream, supplying energy to all parts of the body.

All of these changes happen so quickly that people aren’t initially aware of them. In fact, the wiring is so efficient that the amygdala and hypothalamus start this cascade even before the brain’s visual centers have had a chance to fully process what is happening. That’s why people are able to jump out of the path of an oncoming car even before they think about what they are doing.

The intensely stressful situation will suddenly overwhelm you and thrust you into a state of mind that’s difficult to deal with.

Fear, anxiety, adrenaline. Any complicated tasks will become exceedingly more difficult. Even your memory will be affected.

That’s why your home defense plan needs to be simple! 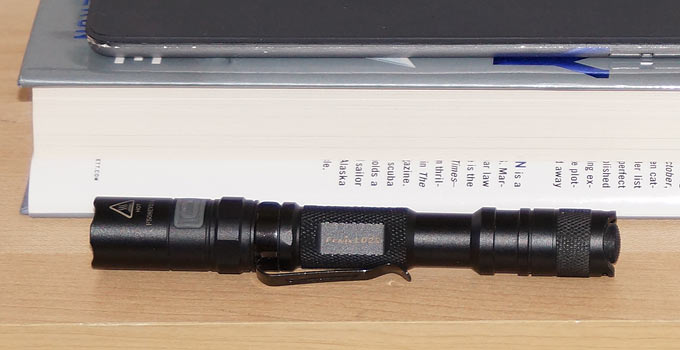 The reality is that any flashlight will get the job done. Some better than others.

I’m a bit of a flashlight person and have quite a variety of choices at my disposal.

Currently the flashlight designated to my nightstand is a tactical Fenix LD22.

– It’s just the right size (not too small, not too big).
– It has a rear tactical on/off/momentary push-button is perfect for stressed engagement.
– Separate switch for brightness & mode. It remains where you last set it.
– 300 lumens is really bright!

Do Not use a flashlight that cycles through modes every time you click it on/off! You will not be able to deal with that very well under stress. You want simple on/off functionality. 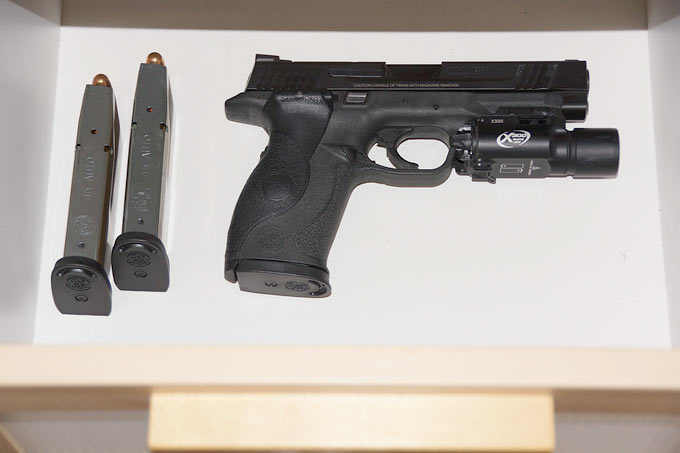 I keep a loaded handgun in the front of my top drawer and a few extra magazines. If you are not a gun owner, you could use a bat, knife, or other blunt object.

Important! Note: We do not have any others living in the house. It’s just Mrs.J and I. If children will be visiting our home, any such handgun will be placed in a pistol safe. If you have others at home, be responsible and keep your handgun in a rapid access pistol safe on your ‘home defense nightstand’ or within quick access.

As some of you know, I’m a big fan of this particular pistol safe.
More: Review

It is equipped with a rail-lock mount Surefire X300 tactical flashlight (redundant with my nightstand flashlight). It’s mounted in such a way that I can easily engage the light with my forefinger while gripping the handgun normally.

It is also equipped with Crimson Trace LG-660 grip-actuated laser. By simply holding/gripping the weapon naturally will engage the laser.

I like the laser concept for home defense because it’s simple.
Point red dot on target. Pull trigger. (No sighting required)

A Phone on your Nightstand

Be it a cell phone or landline, the ability to reach 911 is important without having to go to another room in your home.

You might want to read this:
Home Invasion And What To Do…

“If” it ever happens, the bottom line is you want your defense to be as simple as possible. The fewer thought processes that you need to deal with, the better.

This also involves the decision to keep one in the pipe, so to speak. Not having to chamber a round… it’s already ready to go. Safety on or off? (my M&P45 doesn’t have a separate safety lever so I don’t even have to think about it). The ‘safety’ is built-in to the trigger mechanism.

For those who wonder why I chose a pistol rather than another type of firearm (shotgun or rifle)… Actually I also have a shotgun in the closet, but the equipped pistol will serve well in constrained environments versus the long barrel of a shotgun in my opinion.

That said, a shotgun is preferred by many in this regard. And I “get it” as to why…

Okay, I’m real curious to hear from you all.
Do you have a home defense nightstand?

How are you equipped to deal with the possibility?