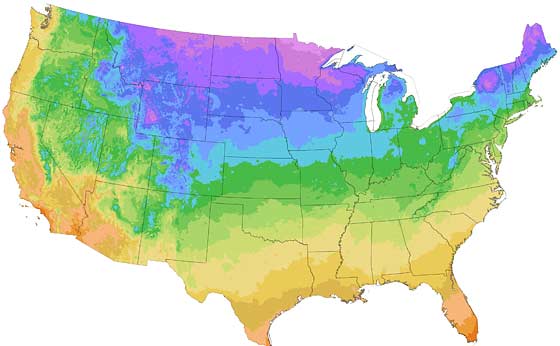 Growing season length is often summarized as the days between first and last frost. This in itself is variable too. Regardless of what you see on a growing season map (hardiness zone map), mother nature might shorten your season, or even lengthen it! And sometimes that can be fairly significant!

In parts of the northern United States the growing season length might be roughly April/May to about October. In milder regions it might even be (roughly) February/March to November or longer. I live in northern New Hampshire and my growing season can be pretty short depending on actual first and last frost dates. I’ve seen last frost in late May, and have also experienced it during early June. Similar variability for first frost date. A number of times during first week of September, while also many times getting much further through the month. You never know for sure!

Here are a few online tools to help determine finer details of your growing season.

The USDA Agricultural Research Service updated and revised their Hardiness Zone Map for the United States during 2012. It’s now more specific with finer resolution and specific interactive information with granularity to your local region. It’s pretty amazing. You can even simply select your zip code to discover your zone.

The Plant Hardiness Zone Map can be used as a tool to determine which plants are most likely to thrive at a location. 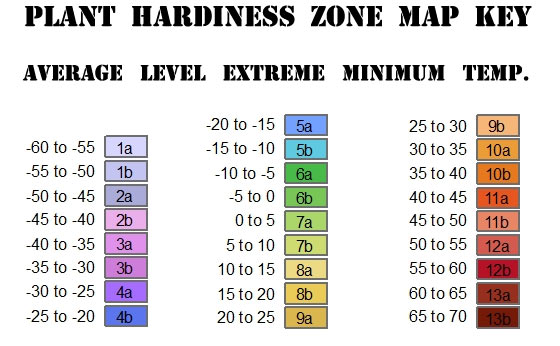 While looking at the map ‘key’, you can see how the zone numbers are scaled to finer detail with the alpha subsets (e.g. 6a, 6b, 7a, 7b, etc.). The temperature represent the extreme minimums for that given zone – kind of a worst-case scenario. For example, I’m in zone 4a. Been here for about 8 years. Coldest it’s been during that time was -32°F. So their zone maps seem pretty accurate.

You can select State, Regional, or National views, in various resolutions. You can view, download and save, and even print the maps:

Your planting zone is a good guide, but more information is better. Knowing the first and last frost date for your region will help you narrow down the time of your growing season. Important!

Simply enter your zip code (or city, state) into the frost dates calculator. The results will also include the number of growing days available (based on average frost dates).

Frost dates are only an estimate based on historical climate data and are not set in stone! The probability of a frost occurring after the spring frost date or before the fall frost date is 30%, which means that there is still a chance of frost occurring before or after the given dates!

For example, the frost date calculator is being pretty generous for my zone. But I know from experience that my growing season is sometimes shorter. I plan for that, and grow vegetables with quicker time-to-harvest. I envy you who live further south and can grow food with a much longer growing season!

From the Old Farmers Almanac…

[ Read: Gardening Hat – Features That Matter Most When Choosing One ]