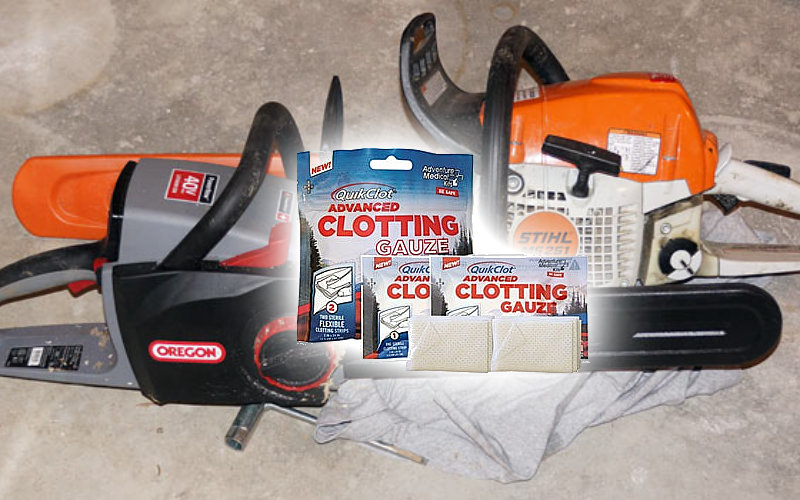 A chainsaw is a highly dangerous and potentially deadly tool! I attended a Forestry first aid class awhile back which emphasized this reality, and why you need a chainsaw trauma kit.

The instructor put out a statistic that Forestry Operations is the #1 most dangerous occupation. And traumatic bleeding is of highest concern.

I’m typing this reminder today because I’m going out later with my chainsaw. A few trees came down (leaners) from last winter’s storms on a part of the property near a hunting tree stand. Got to get that area ready.

I have been working in the forest for years with my chainsaw. It is WAY TOO EASY to become COMPLACENT! All it takes is one unforeseen mistake, a sudden kickback, or a broken chain, (among other things) to cause traumatic disaster.

So there are several questions to ask yourself before walking out the door:

Where am I going and does anyone else know?
What are the hazards (e.g. the chainsaw)?
Who will take care of me if something happens?

It is HIGHLY ADVISABLE to have another person with you while out with a chainsaw. If that’s not possible, it sure would be a good idea to let someone know where you’ll be and when you expect to get back. If I’m out by myself, I take a 2-way radio, my cell phone, and a small trauma kit (see below).

The hazards of using a chainsaw are potentially grave. So to mitigate that fact, be sure your equipment is in very good operating condition. Wear protective clothing (chainsaw chaps) and gear (helmet with face screen, chainsaw gloves). AND, ALWAYS BRING A TRAUMA BLEEDING KIT.

The emphasis of this article is the chainsaw trauma kit. It should always be with you when you have a chainsaw. Survival is up to you. Nobody else.

Actually, realistically, according to the instructor you will have about 2 minutes to make a decision and do something. After that, you will likely enter “shock”.

What are you going to do in that 2 minutes if you do not have your trauma kit with you (on your person or with your partner)? You will probably bleed out, right there.

Keep Calm and Stop the Bleeding

That’s how you will survive. You must remain in control of yourself such that you have the desire to do it, to stop the bleeding.

The process is conceptually simple. It’s like putting a cork in the bottle. You need to plug the leak, so to speak. You will need a cork (QuikClot pad), and a wrap (Israeli Bandage or stretch wrap ). Plug it, and then apply pressure.

Look for the related articles below for each of the following suggested items:

QuikClot is a sponge/pad containing a natural enzyme that speeds coagulation of blood. A major bleed will likely require to apply this type of pad in the field.

Wrap it snug around the appendage. The Israeli Bandage wraps and also applies pressure with its unique but simple application.

Optionally, wrap the plug (the pad or QuikClot) with a elastic stretch wrap material.

If there is a arterial bleed (spurting blood), you’re going to need a tourniquet. Your limbs make up about half your body’s surface area. So there’s a ~50% probability that a major traumatic injury might occur on a limb. And there are arteries there…

That’s all I’m suggesting. And I said “woods”, but it’s anywhere that you will be operating a chainsaw.

Take the time to order the stuff. Then take a little time on the internet to see how to use it. (I have some articles linked below).

Then figure out how you will carry it. I tend to wear cargo pants with deep pockets, so I can tuck the little packets inside a pocket. Or you might want to belt carry them in a convenient sized pouch. Just figure it out. Do it once, and you’ll be good to go on all subsequent outings.

How to Stop The Bleeding With Quik Clot

How to Use Israeli Bandage To Stop Traumatic Bleeding

About the Stretch Wrap Self Adhering Bandage