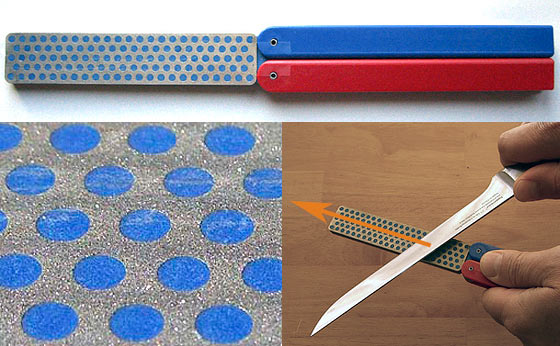 You don’t need to own a expensive set of kitchen knives. But you really should own a knife sharpener for your kitchen knives. Very sharp kitchen knives makes a tremendous difference while preparing foods. Dull kitchen knives are actually more dangerous! A shark knife will slice through with ease. A dull knife requires unnecessary pressure /force – which could be bad for your digits…

There are lots and lots of knife sharpening tools, and most all of them will get the job done.

A good knife sharpener does not necessarily have to be expensive. Here’s one that I keep specifically with my kitchen knives.

Some time ago (actually quite awhile ago) I had purchased a knife sharpener that wasn’t too expensive – to see how well it works for my kitchen knives. It turned out to be quite a surprise. It worked amazingly well, and it’s very easy to use.

This particular knife sharpener is made by a company named Diamond Machining Technology, DMT, and is manufactured in the USA. It looks like they make several models, but this one, the Diamond DiaFold, I found to be affordable, very effective and simple, and it folds up into a neat little package.

The way it works is simple.

This particular sharpener has two surfaces, both impregnated with diamond particles. One course surface and one fine surface.

How To Sharpen Kitchen Knives With DMT Diafold

That angle for a kitchen knife is typically ~20 degrees. This is the angle at which you should sharpen against the sharpener’s surface.

Simply look at the knife blade edge and pay particular attention to the angle of the blade where it steepens to a sharp pointed edge.

As you rest the knife edge on the sharpener surface, and as you rock it up and down, you can usually ‘feel’ where the right angle is. You an also see it if you look closely.

Here’s a tip… Hold the knife at a 90-degree angle to the sharpener surface (straight up and down). Then halve the angle (45-degrees), and then halve it again. Now you’re reasonably close to 20-degrees.

More expensive sharpening systems have methods to physically hold the blade and/or sharpener at a fixed angle or adjustable angle. However, the basic method of “eyeballing” it will work quite surprisingly well and get you very good results without becoming overly elaborate with the process.

There is no need to apply much pressure. Just lightly push /sweep the kitchen knife across the surface while maintaining the proper angle as best you can.

Try to sweep the entire blade’s surface in one motion as you complete each sharpening motion.

Then flip the knife over and sharpen the other side the same way.

I typically start with the course surface side of the DMT sharpener and work it a few times, then switch to the fine side.

It’s a great tool to keep around for your kitchen knives.

Like I said, there are lots of good knife sharpeners out there! But you might give this one a look for yourself. You will be slicing through your kitchen foods with ease! I now have several of these (as well as other types of knife sharpeners /stones)