How To Acquire Food Storage Even If You Are Poor… 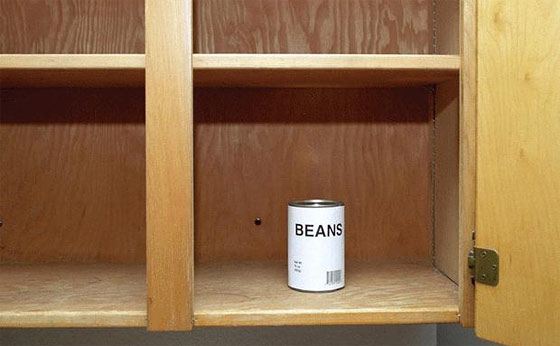 Lets face it. There are lots and lots of people who consider themselves ‘broke’, as in ‘no money’. More specifically, they don’t think they have enough money to build up a cupboard or two full of food for emergency storage (or just plain old having some more…).

There are many people who live week to week on little income while struggling to make ends meet. There are bills to pay and there’s little money left over for stockpiling some extra food. There might only be enough food in the house to feed the family for a few days or maybe a week – until the next paycheck comes in.

Well here’s the thing: There likely IS a way to put some food in the pantry…

There are lots of foods that you can buy which are really relatively cheap compared to the foods that the family might be currently eating. Think in terms of value. Even if you choose not to change your eating habits, some of these foods are so comparatively cheap that there’s little excuse not to be able and stock up a cupboard or two.

I’m going to throw out a few ideas, and I welcome your input as well.

Firstly, those who consider themselves poor or broke or under too tight a budget to procure extra food – consider this: Take a look at what is being purchased every week and make adjustments. Not everyone might like it (a shift in diet) but there are likely some foods that could be replaced with alternatives to free up a few dollars for purchasing extra food.

Some grocery stores have higher prices than others! Go to the cheaper store (if the driving logistics – cost of gas – makes it worth the trip).

Buy only if it’s on sale, if possible.

Don’t buy everything that the ‘kids’ want, and don’t tell me that they will ‘only’ eat this or that – because unless there are allergic reactions involved, the kids won’t starve if they don’t get their particular brand of this or that. When they’re hungry enough (after putting up a stink about not getting what they want), they’ll eat 😉 Right?

It is amazing how many people do not compare unit prices (or don’t know how) when choosing a particular food! In most every grocery store the unit price is printed right on the price tag at the shelf (price per ounce, per pound, etc..). You don’t even have to do the math to figure out the posted price versus the number of ounces your getting. The unit price should already be normalized so just go with the cheaper unit.

Buy some so called ‘cheap’ food every week. Even if it’s not part of your normal consumption. Maybe things like Mac-n-cheese. Pasta. Rice. Dry beans. Look for sales like 10 for 10 (e.g. 10 jars of pasta sauce for 10 dollars) or any such sale of cheap foods. These items will eventually fill your cupboards and there will be food available for emergencies or whatever else.

Your turn… Put yourself in the shoes of someone who may be poor… Any ideas of particular foods that are typically ‘cheap’ that one might buy to go towards a food storage? Any other ideas or suggestions in this regard?