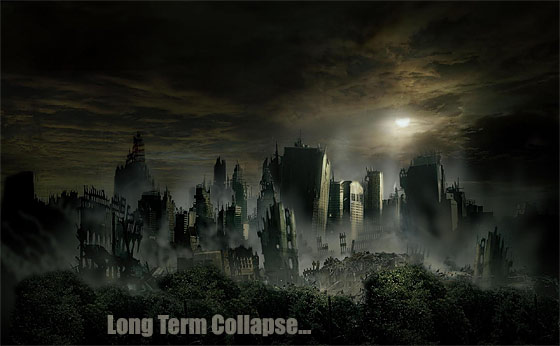 “The people who do the best (under such conditions) are not those who have prepared in an attempt to create a bubble of normalcy around them, but rather those who can adapt the fastest to changing circumstances.”

I very much agree with the quote above from a reader responding to yesterday’s article. It is well worth reminding. So many of us (preparedness-minded) focus (too much?) at times on our ‘preps’ – our ‘stuff’.

Certainly, our preps will prove to be very beneficial during the time when we really need them. Certainly a very deep pantry will feed us for a time directly proportional to the ‘deepness’ of that pantry. Certainly all that we have acquired will help us during the aftermath and unfolding of time.

However when we’re talking about a long term collapse, a time in which life as we know will be drastically changed for a year or more (forever?), then we’re talking about something that goes way beyond just our preps. We cannot simply prepare for such a time by deepening our pantry. While this WILL buy us time, the fact is that we will never be fully prepared in this way.

The key to ‘really’ preparing for a long term collapse is successful adaptability to changing circumstances. Resourcefulness. “To make everything out of anything”.

Preppers do spend a lot of time (me included) building up stores of goods and supplies which will indeed create a ‘bubble of normalcy’ around us if and when we need it. There’s nothing wrong with that! This bubble that we’ve created for ourselves will get us through most ‘disasters’ until such time that life returns to ‘normal’.

However it is extremely important to look outside that bubble in preparation for a major event, a collapse of life as we know it today. If you are preparing for this, then you must look towards a means of self-sufficiency and safety/security.

If you become self-sufficient (be it just yourself or with a group) and if you remain safe and secure in this self-sufficiency, then you will more likely survive.

With that said, becoming truly self-sufficient is enormously challenging and involves not just ‘stuff’, but the skills and know-how in order to actually do it.

Additionally, one’s safety and security during such a time will likely be just as enormous a challenge – greatly depending on where you live or where you end up.

Awhile ago I wrote the article, “Survival Skills Of The Great Depression Era”, which listed things like frugality, homestead and farming skills, handyman, mechanic, and health care as some of the valued skill sets during that time.

As I’m sure you’re beginning to see, the point I’m making is that in order to really become prepared for a long term collapse of life as we know it today, then we must get beyond Preparedness-101 and really focus on additional things such as mindset, skills, and adaptability…and put ourselves in a hypothetical position of trying to survive during a time when our infrastructure and supply chains are basically long gone or greatly diminished.

When your own stores run out, then what?

I do believe that there will be many regions where the right communities will adapt and overcome. I believe that this will mostly occur in so called ‘rural’ or ‘country’ regions where people there already (to an extent) may be partially self-sufficient. I’m not saying that there won’t be great hardship or failure there (there certainly will), but these people stand a better chance than the vast majority of those who live shoulder-to-shoulder in the city metro regions or suburbia and have just about zero ability (or the skills, land, and resources) to even think about being self-sufficient.

When you really think about it on the most very basic of levels, to really survive a long term collapse we must produce enough food (calories) to live. That food must also be preserved for throughout the year. How many of you (us) can actually do that? Do you really know how much food that is? (It’s more than you might think)

How many will be able to adapt to the circumstances?

If you are interested in preparing for ‘long term’ collapse, then it might be a good idea to start now with your thought process, plans, skill set development, and ‘know-how’.

While I know that many here on this blog have the ability to successfully grow a large garden and to preserve its bounty, and there are many here who raise their own livestock and likely already are living a relatively or partially self-sufficient lifestyle, the fact is that not everyone is ready or knows how, or lives in a place where it’s feasible.

If you really want to survive ‘long term’, then you must be able to adapt, to do it, to find a way to be more self-sufficient. This may involve moving somewhere else and changing your current way of life. Not many will actually do this because it is so disruptive to their current normalcy. It is not comfortable to make such a big change.

Additionally most people do not believe that there will ever be such a time in which our infrastructure, our supply-chains of good and services, or our grocery stores will be disrupted for a long period of time. Our society and way of life has long ago advanced beyond the ‘primitive’ requirements of self-sufficiency (which is actually looked down upon by many) and to actually forego our modern way of life to one of basic self-sufficiency is to take a big step backwards in their minds. It is inconceivable that all of our technological advancements could some day be disrupted in such severity that their lives will actually be in danger. The system is so big that it seems impossible to fail. It’s unimaginable (to them).

But is it unimaginable to you?
Do you have what it takes to really survive long term?