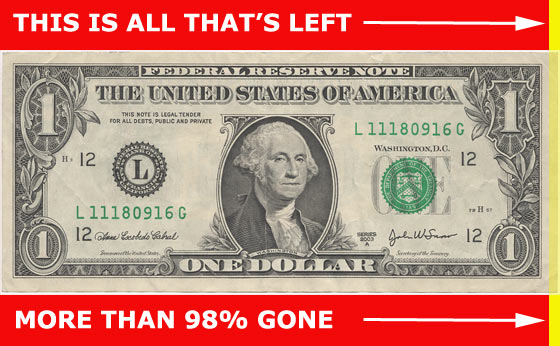 The United States dollar is of course, a piece of paper. While it is a medium of currency used for exchange between labor, services, products and goods — it is a constantly devaluing currency. Sometimes slow, sometimes fast.

The dollar doesn’t stretch as far as it used to because the money supply is always expanding.

When compared with it’s value in gold, here’s what happened, and the reason why you might want to own some physical silver or gold…


Between 1783 and 1913, the U.S. dollar was a real store of wealth because inflation was essentially zero (except during wartime). If you saved a dollar in the year 1800, a hundred years later you could still buy the same amount of goods with your savings.

Until 1933, people carried gold coins in their pockets, and paper bills could be exchanged for gold and silver coins at any bank. In 1933 however, the gold of US citizen’s was confiscated by the government, and the dollar was devalued by 41%.

The treasury then attempted to hold the value of the dollar at 1/35 of an ounce of gold (810 mg), which was mostly successful into the late 1960’s.

Shortly thereafter, the fact that it required so much gold to buy up all the dollars that foreign countries were selling – the government decided to stop, and “closed the gold window” in 1971.

Over the next 10 years the value of the dollar collapsed and hit bottom in 1980.

Then, through the next 20 years the dollar slowly recovered “some” of it’s value as a result of paying high rates of interest and reducing taxes, but the dollar recovery didn’t last long.

The Federal Reserve has no choice but to maintain their ZIRP (zero interest rate policies) and will be printing dollar currency for the foreseeable future.

Their other choice (to raise interest rates) will destroy what’s left of the economy (the interest payments on the debt will sky rocket) and will likely trigger the chain-reaction destruction of the derivatives market worth hundreds of trillions of dollars (some say as high as a quadrillion) bringing down the entire financial system into a heap of rubble.

It seems reasonable then to preserve some of one’s wealth by procuring some physical bullion, be it silver or gold.

Silver certainly is the easiest to build on, given it’s current bargain spot price of approximately $19 an ounce (as of this article date).

Gold, although more expensive in dollars (about $1,245 an ounce as of today’s date), has been manipulated to this low dollar price – and will eventually find it’s real physical value dollar equivalent when they are no longer able to control it. At that time it could be stunning as to the new highs it will reach. Until then though, it may be wise to procure some, if one can afford the luxury of doing so.

If you still need some convincing, check out the U.S. debt graph here: