Many lightning victims were seeking shelter when they were struck because they waited too long before seeking safety.

Many believe that they are safe from a lightning strike because the thunderstorm is not yet overhead.

The thing is, when you hear thunder, even a distant rumble, you are already within striking distance of a potentially deadly lightning bolt – even a bolt from the blue.

Under good listening conditions, you can hear thunder from a distance of about 10 miles. That’s the approximate distance that lightning can strike outward from a thunderstorm!

Unfortunately most people don’t seek shelter until the first lightning strike is closely upon them. They don’t realize they could be struck even though the thunderstorm is thought to be far enough away.

Threat of Death by Lightning Strike

Risk of death by lightning is HIGHEST when thunderstorms are NOT YET OVERHEAD.

It begins at a distance of about 10 miles away and peaks just prior to (and during) the thunderstorm initial approach.

The second peak of death-by-lightning is when the thunderstorm is departing. 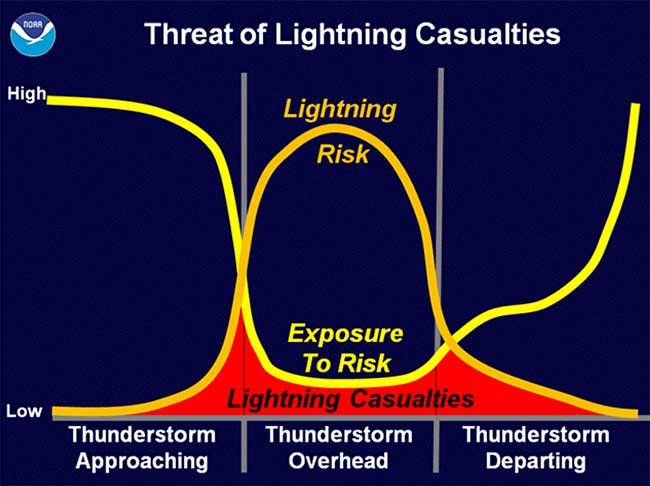 How do Thunderstorms make Lightning?

Well actually, the lightning is seen before the thunder is heard. But here’s a quick explanation:

Causation can be more complicated than this, but, they typically develop from rising warm air heated by the sun, growing in height to become towering cumulus clouds.

The bottom, or base of a thunderstorm cloud will develop an electrical charge (typically a negative charge) from ice particle interaction within the updraft and storm itself.

Similarly the top of the cloud will develop a positive charge. We now have an electrical field. When strong enough to break down the air-resistance, a lightning bolt will ‘short circuit’.

This can happen between the cloud and ground too. When strong enough, the charge between the two may ‘short circuit’ and go BOOM:

A ‘leader’ or ‘leaders’ form, and may branch out as it approaches the ground in search of a discharge point.

A conductive ‘streamer’ will then shoot up from an object attached to the ground, usually a high point within the area. It will reach up and meet with the leader to create an often dramatic and powerful return stroke of bright lightning.

The average ‘negative’ bolt may discharge ~30,000 amps of electrical current and may carry millions of volts, depending on factors.

The extremely powerful but less common ‘positive’ bolt of lightning (about 5% of all strikes) will discharge about 5 – 10 times the energy of a ‘negative’ bolt (and last about 10 times longer)!

It typically comes from the top of a very large anvil shaped thunderhead and reaches out for miles (outside the cloud!) ‘into the blue’ before it finds a pathway to ground.

NO PLACE outside is safe when thunderstorms are in the area.

If you hear thunder, lightning is close enough to strike you.

When you hear thunder, immediately move to safe shelter: a substantial building with electricity or plumbing, or an enclosed metal-topped vehicle with windows up.

Immediately get off elevated areas such as hills, mountain ridges or peaks

Never lie flat on the ground

Never shelter under an isolated tree

Do not use a cliff or rocky overhang for shelter

Immediately get out and away from ponds, lakes and other bodies of water

Stay off corded phones, computers and other electrical equipment that put you in direct contact with electricity.

Stay away from windows and doors, and stay off porches.

Do not lie on concrete floors, and do not lean against concrete walls.

The following safety tips are sourced from the National Lightning Safety Institute:

1. PLAN in advance your evacuation and safety measures. When you first see lightning or hear thunder, activate your emergency plan. Now is the time to go to a building or a vehicle. Lightning often precedes rain, so don’t wait for the rain to begin before suspending activities.

2. IF OUTDOORS…Avoid water. Avoid the high ground. Open spaces. Avoid all metal objects including electric wires, fences, machinery, motors, power tools, etc. Unsafe places include underneath canopies, small picnic or rain shelters, or near trees. Where possible, find shelter in a substantial building or in a fully enclosed metal vehicle such as a car, truck or a van with the windows completely shut. If lightning is striking nearby when you are outside, you should:

A. Crouch down. Put feet together. Place hands over ears to minimize hearing damage from thunder.

B. Avoid proximity (minimum of 15 ft.) to other people.

3. IF INDOORS… Avoid water. Stay away from doors and windows. Do not use the telephone. Take off head sets. Turn off, unplug, and stay away from appliances, computers, power tools, & TV sets. Lightning may strike exterior electric and phone lines, inducing shocks to inside equipment.

4. SUSPEND ACTIVITIES for 30 minutes after the last observed lightning or thunder.

5. INJURED PERSONS do not carry an electrical charge and can be handled safely. Apply First Aid procedures to a lightning victim if you are qualified to do so. Call 911 or send for help immediately.

Which State’s Have The Most Lightning?

Florida.
Then Louisiana. See the map below: 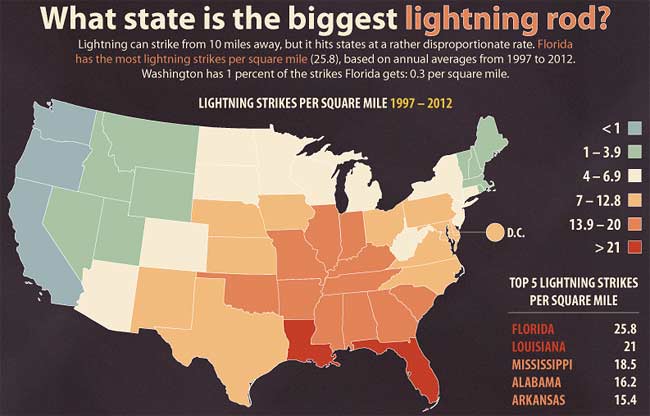 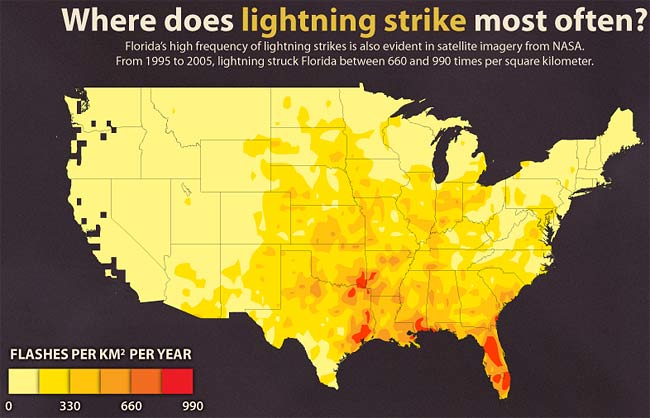 There is no safe place outdoors when a thunderstorm is nearby.

The vast majority of lightning victims were going to a safe place but waited too long before seeking safe shelter.

The channel of air through which lightning passes can be heated to 30-50,000 degrees-F, hotter than the surface of the sun!

The rapid heating and cooling of the air near the lightning channel causes a shock wave that results in the sound we know as “thunder”.

According to the NOAA, lightning causes an average of about 50 fatalities and 400 injuries each year in the United States.

Lightning occurs with all thunderstorms.

It causes more than $1 billion in insured losses each year.

Rubber tires on a vehicle will protect you from lightning. Rather, it’s the steel frame of a hard topped vehicle that provides increased protection if you’re not touching the metal. While you may be injured by lightning if it strikes your car, you are much safer inside a vehicle than outside.

“Heat lightning” occurs after very hot summer days and is no threat. Wrong. “Heat lightning” is a term used to describe lightning from a thunderstorm too far away for the thunder to be heard. It could still be dangerously close.

How to know How Far Away Lightning is

Count the number of seconds between a flash of lightning and the sound of the resulting thunder.

Divide this number by 5 to get an estimate of the distance in miles to the lightning strike. In other words, it’s about 5 seconds per mile.

[ Read: Which Weather Alert Radio Should I Get? ]

10 Signs of a Tornado