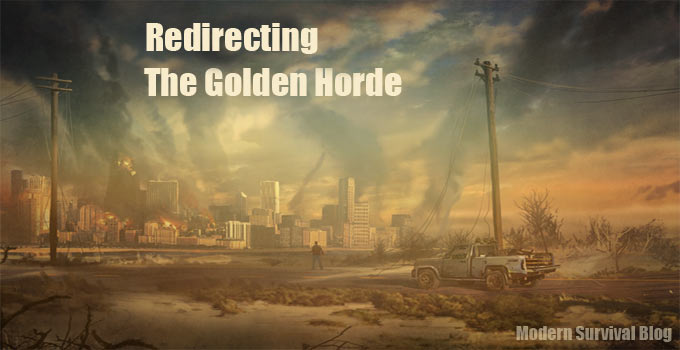 Within the context of SHTF survival. Many years ago, I believe that I may have first come across the phrase “Golden Horde” from a novel written by James Rawles, Patriots: Surviving The Coming Collapse (view on amzn) first published back in 2009. Or maybe it was Once Second After by William R. Forstchen back around the same time. It’s a modern-day play on words referencing the Mongol Horde of the 13th Century. The golden horde in the context of SHTF is basically the notion of desperate people leaving cities after a major collapse of infrastructure (food, water, services…).

While the phrase originally came from the ancient Mongols who overran eastern Europe in the 13th Century, the prepper /preparedness community uses the phrase as follows:

“The “Golden Horde” is (are) the anticipated throngs of unorganized and organized individuals, groups, and ‘gangs’ who will be out roaming, searching, and even looting & pillaging for food and supplies following a major widespread societal and infrastructural collapse – without the rule of law.”

There’s a lot of varying opinion regarding the possibilities and probabilities of a Golden Horde, and how far (or not so far) they might get from any given population center. (I’ve written a number of articles on the subject over the years.)

UPDATE: There’s renewed interest in this subject, having recently published the following article. So, I’ve updated and added more content to this article on the Golden Horde for further discussion and comment.

No City Can Feed It’s Own People

Under extreme conditions of desperation without hope of external “help”, some will give up as they weaken, while others will desperately extend outward, roving, on the prowl for food, supplies, and whatever they need. Still others will individually, or by group, take advantage of ‘without rule of law’ because they are who they are. It will be dangerous times indeed.

I don’t want to get into the debate about the likelihood or unlikelihood of the Golden Horde itself, or how far they might get. There are lots of variables that may affect this including population density, regional – geographical and other factors. People are going to do different things. But surely some, if not many, will be able to make it out. And they are going to want, and need…

Security Against The Golden Horde

It seems to me, a high priority should be put upon misdirection and/or redirection to lesson your chances of an encounter, or being overrun or even pillaged.

And let me preface this by saying:
I hope this type of situation never happens!

While a physical confrontation may be a last resort, and perhaps unavoidable under some circumstances, one would think that all efforts should be made to avoid the chance of confrontation to begin with.

Someone on the blog commented,

“SHTF and WROL.” “The Golden Horde may in fact be looting and causing general mayhem. Myself, I am hoping people remain civilized for the most part. Looters and angry mobs can become very ugly in short order if unchecked.”

I agree with the hoping part (although not actionable itself), and I also agree that “angry mobs” can (and likely will) become very ugly – quickly. Desperate people will likely do desperate things. Especially if their very survival is dependent upon it.

If there is any possibility of a Golden Horde in your area, no matter how large or small the groups themselves, one might consider a plan of action (and a backup plan) just in case.

How Big Will The Golden Horde Be?

While talking about the scenario of major city infrastructure collapse, you might consider that most will stay. Some say that a city may typically have about one week of food/supply before it runs out. If the power is out, well, water and other issues will surface quickly too. The thing is, most people truly believe that the government will somehow save them. As though there’s enough FEMA to go around. Those who think that way, will likely perish. What percentage? Probably somewhat depends if it’s a blue or red city. Either way, the majority will fall into this category, in my opinion.

I really have no accurate idea how many may attempt to escape. And further, how many will actually succeed, and how far they’ll go /get. But even if 10% hit the streets, that’s a lot of personnel when you’re talking about city population region numbers. That’s why it’s good to live pretty far away from major urban areas (if you’re concerned about such possibilities).

Hardly anyone will be organized, especially at first. Most group sizes within the overall numbers of exiting hordes will be small.

Consider security scenarios for each of a number of hypothetical group sizes.

There will be individuals by themselves. There will be small groups of just a few or several. Some groups may be larger. And others, more organized, as in offensively – maybe numbers similar to a ‘squad’ (~12). There may even be larger ‘platoon’ size groups, say equivalent to 3 or 4 squads (power in numbers – though a challenge to manage). And so on. You get the idea. It’s going to be variable. Some will present much more of a threat than others.

Having said that, my own opinion is this:

Initially as people’s supplies run out, there may be individuals and small groups who will rove and forage out in search of supplies for survival. Some will scavenge what they need from what may be naturally available. Some will approach others for help and handouts. Still others will become more desperate, demanding, and forceful. A terrible time indeed where some or many will do whatever they need to do to survive. There will be unimaginable pain and stress if and when the cities collapse.

As time goes on, there will be the ruthless element who will establish their own groups, tribes, gangs. Some of the desperate will join up with the promise of a ‘piece of the pie’. They will be a dangerous force for sure.

Organized groups intent on ‘taking’, will likely and initially prey on what they perceive as the easiest targets. They will be looking first for easy opportunity. Why? Because no one wants to put themselves into undue danger. Even the looters themselves.

One good deterrent in this context is to be invisible. You do not exist. You, or your place. No one can see it from the road. That’s not to say they won’t stumble across it, but if they can’t see it from their routes of travel, they won’t even know there’s an opportunity.

Being invisible to the Golden Horde might be literal (out of sight) or figurative (eliminating invitation while in plain sight).

Literally out of sight

Ideally your ‘place’ is out of sight from primary and even secondary routes of travel. I’m just pointing out that comparatively it’s probably safer in this regard to be “off the beaten path”. Not to say however that you won’t be found. So don’t convince yourself that you’re safe.

For example, I happen to live at the end of our private dirt/gravel road, completely out of sight from anyone. However common sense indicates that ANY road is a clue that ‘something’ is down there… I’m not fooling myself into thinking that I would not be affected. Fortunately however I live very far away from population density, and in a town less than 1,000 – many of whom are living a lifestyle on the side of self reliance.

Thought:
– If you have a garden, is it in sight?
– If it’s summer or fall, people will be ransacking gardens for sure.

Many or most people live where there are plenty of neighbors. Suburbia. Even out in rural areas many people still have visible neighbors and can be seen from the street.

While there may be only so much that you can do to deter a large organized horde rummaging systematically through an area, you might be able to misdirect smaller groups or individuals a bit more easily (or at least avoid unintentional invitation).

Again, the individual or small groups will be looking for easy opportunity. So make it harder.

You might approach this from two different viewpoints. One is that of “graying out” your abode. To blend in or to appear non advantageous. The other is to present threat of force such that they’ll move along to an easier target.

Both have their advantages and disadvantages.

Blending in.
For example, you might consider that a place appearing to be nondescript, of little value, or maybe even abandoned or having already been looted (how one accomplishes this appearance gets into the creative) – maybe that’s a deterrent to an extent. Although this in itself may also be an invitation for “lookers” who feel they’re safe to check it out because of the appearance of no activity. It’s hard to say…

Threat of force.
You might consider that the appearance of a defensible fortress may likely deter most individuals and small groups. However it would also signal that there are supplies to be had there. You may be opening yourself up to the possibility of word spreading, and maybe even a larger attempt. But maybe not, depending on your own region.

There will be no absolute solution to this dilemma. What may be effective in one area might not in another.

I’m of the general opinion that being ‘grayed out’ and unremarkable is preferred (and ideally not seen at all from the road). While at the same time being backed up with a strong defensible position. Plus, a backup plan to bug out (even just temporarily) if things get out of hand (no sense dying over ‘stuff’). You could have cache’s elsewhere to get you by.

You need to understand that a large enough force WILL take your stuff (or worse). Have a plan to get out. Ideally you would know they’re coming well in advance of them getting on your property. Well in advance of any contact. You might listen for their communications (radios). Decide your plan of action early. If the decision is to become offensive, this will ideally be addressed before the force is already on your property. Otherwise, if it doesn’t look do-able, it may be best to get out under that circumstance. Save your life. Stuff isn’t worth it. Although you will need a secondary plan to survive afterwards! (No one said this was going to be easy).

There’s nothing to see here. Move along…

– Noise. Don’t make it. It will “attract”.
– Smells. The aromas of cooking may carry a long way.
– Smoke. It can be seen and smelled. Wood stove?
– Solar panels. They will be a commodity. Can you see them from the street?
– Light. At night it’s quite visible through windows.
– Supplies in plain view? Hide them.

So now that I’ve got this topic going, let’s hear some of your opinion…

The Zombie Hordes Distance From Cities

When Resupply Breaks Down