Dehydrated Food: Testing Dryness And How To Know When It’s Done 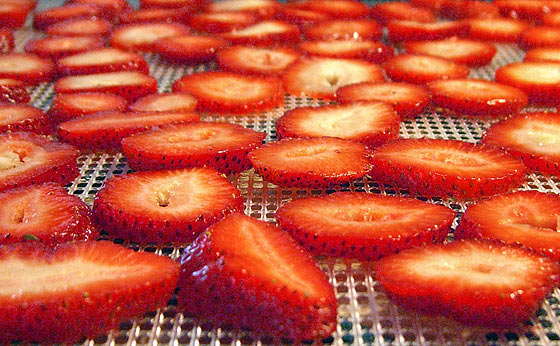 Dehydrated food – dehydrating your own food is a relatively easy way to stock your excess harvest from your garden or to store back vegetables (and meats) which you bought on sale.

During the process, one question is, “How do I know when the food is ‘done’?”

Dehydrated food has been heated at low temperatures to remove most of the water content (moisture) so as to enable a longer shelf life. Since there is no high temperature ‘cooking’ or other process such as boiling, etc., dehydrated food preserves much of the food’s nutrients compared to some other methods.

The process of making dehydrated food is fairly easy. Generally, you slice your food into widths of 1/4″ or less, place them on the dehydrator trays, set the temperature and timer, and wait until they are done. While the low-temperature heating time may take as long as 12 hours or more (or less, depending), the only time you are actually involved with the process is when your are slicing the food and placing on trays.

The question is though, how do you know when it’s done?

Generally, most professional dehydrating processes use the following percentages as a measure of being ‘done’…

Meats at about 20% moisture content or less.
Fruits about 10% moisture.
Vegetables 5%.

Residential dehydrators (compared to professional commercial dehydrators) cannot measure and control the moisture content. Therefore the only method for do-it-yourself is to periodically test the pliability of the food by hand, and with experience you will learn what is ‘right’ for the various foods.

Fruits should be pliable (almost brittle), but NOT brittle. To test your fruit, take a piece you have dried and cut it in half. There should be no visible moisture. If there is too much moisture remaining, you run the risk of them developing mold. Generally speaking, fruit is considered to be sufficiently dry when, after you cut a piece of dried fruit, you cannot squeeze any water out of the piece.

Vegetables should be brittle when done. For example, a pea should shatter if you hit it with a rolling pin. Only a few vegetables, such as tomatoes or yellow squash will feel somewhat leathery when done (as opposed to easily snapping in half brittle).

Meats (Jerky) should be dehydrated using one of the two methods listed in the following article:
Safe Jerky In A Home Dehydrator

Anyone else with examples of how to know when a given food is ‘done’ when dehydrating them yourself at home?