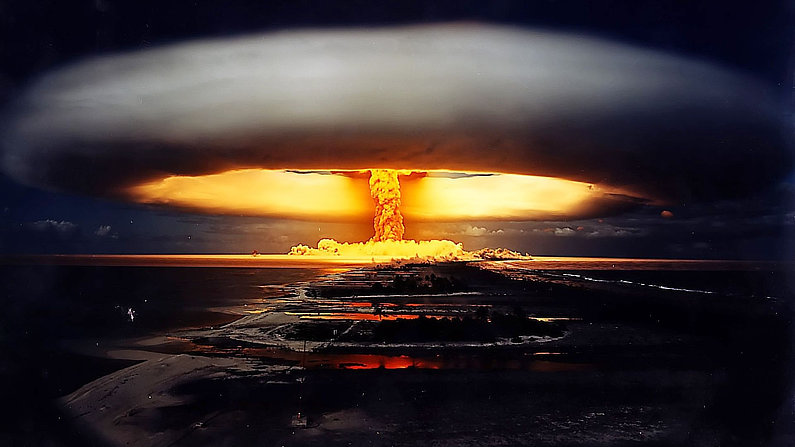 Radiation shielding is a mass of absorbing material placed between yourself and the source of radiation in order to reduce the radiation to a level that is safer for humans.

The effectiveness of the material depends on:

According to the NATO Handbook On The Medical Aspects Of NBC Defensive Operations,

In other words, Gamma and X-ray radiation are of primary concern.

The ‘Alpha’ particle (another type of radiation from a nuclear explosion) is also dangerous, but is hardly penetrable. It can be stopped by a single piece of paper, or an air filter (think of it as a heavy dust particle). It is carried by the wind currents (fallout) and eventually falls to the ground and ‘decays’.

Gamma radiation though travels at the speed of light.

To protect yourself from gamma radiation resulting from a nuclear explosion, there are three things to consider:

The less time you spend exposed to radiation the lower your dose.

Radiation decreases with distance in accordance with the inverse square law. This means that the further away you are from the source of the radiation, the less radiation you’ll be exposed to.

Every material has a “halving thickness.” This is the thickness required to reduce the radiation intensity by half. 50%.

This brings us to radiation protection factor. Or protective factor.

A typical house will reduce the power of the radiation to one fifteenth of that outside – this is called a protective factor of 15. Shelters constructed of the right materials can give a much greater protective factor than this.

According to FEMA TR-87, Standards for Fallout Shelters, “The minimum level of protection for public fallout shelters is PF 40”.

CAUTION: Permanent home fallout and blast shelters described in widely available FEMA pamphlets have protection factors in line with the PF 40 minimum standard for public shelters in buildings. In heavy fallout areas a sizable fraction of the occupants of PF 40 shelters will receive radiation doses large enough to incapacitate or kill them later. Permanent shelters built specifically to protect against nuclear weapon effects should have PF values much higher than PF 40.

How do we apply all this in order to get an approximate idea about gamma radiation shielding for various materials?

If you add another ‘halving thickness’, the material will block half of the remaining gamma rays, leaving 1/4. This is a protection factor (PF) of 4. Another layer of ‘halving thickness’ brings it down to 1/8, or PF 8. And so on.

A radiation shield is characterized by its total ‘protection factor’. For example, a shield that only lets 1/1,000 (one one-thousandth) of the gamma rays through, has a protection factor of PF1000 (the modern day standard).

Radiation shielding materials are commonly categorized by their ‘halving thickness’, which is the thickness of that material required to block half of the incoming gamma rays.

Consider the following chart of materials which indicate their radiation halving thickness, and approximately how much to achieve PF40, PF300, and PF1000 protection.

I’ve sourced the (halving thickness) numbers from what I believe are reputable sources. Then, simply calculated the PF numbers. Note that some of these materials will certainly vary in density and therefore shift one way or the other. For example, wood. They vary in density. Concrete, same thing… depends on its density mix/profile.

Consult with a specialist for accurate determinations. This is for information only.

How Much Concrete To Stop Radiation?

Well, apparently, for typical concrete density, it would take about 24 inches (two feet) to achieve an approximate PF1000 modern-day protection factor (radiation reduced to one one-thousandth). It doesn’t ‘stop’ it. Rather, it’s greatly reduced.

How Much Dirt To Stop Radiation?

Based on the radiation halving thickness of packed soil, it would take about 36 inches, or 3 feet to achieve approximately PF1000.

While searching for data in this regard, I noticed that there are some discrepancies out there. However I have gleaned what I believe to be accurate for this report. Some of my sources include the following:

Anyone who is concerned about radiation fallout should have these:
>> iOSAT Potassium Iodide Tablets
(view on amzn)