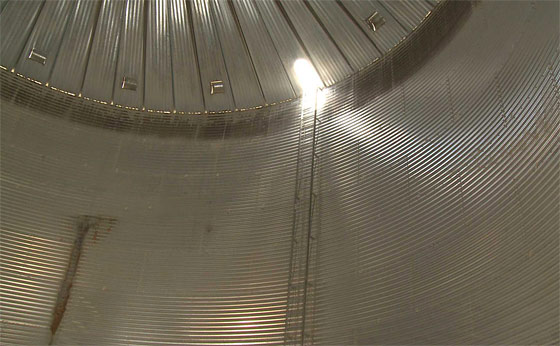 Apparently the United States has no national grain reserves anymore, none at all.

From a preparedness standpoint, if the supply chains of agricultural distribution become interrupted (or the crop cycle itself), there is little or no buffer for Americans to put bread on the table (or without significant cost).

The United States government once held vast grain reserves in silos across the country. Today our national grain reserves have apparently vanished, primarily due to deregulated global markets and globalization, and the 1996 abolishment of our national system of holding grain in reserve – which was gradually depleted until 2008, when the USDA decided to convert all of what was left into its dollar equivalent.

In other words, it’s all gone…

President Franklin D. Roosevelt first created a national grain reserve to help rally the price of wheat and to help American farms during the Great Depression.

It was designed to buffer the supply of grain in order to smooth its tendencies toward boom and bust. When grain prices rose above a threshold, supplies could be increased by bringing reserves to the market — which, in turn, would dampen prices. And when the price of grain went into free-fall and farmers edged toward bankruptcy, the need to fill the depleted reserve would increase the demand for corn and wheat, which would prop up the price of grain.

The stores were gradually depleted until 2008, when the USDA decided to convert all of what was left into its dollar equivalent. And so the grain that once stabilized prices for farmers, bakers and American consumers ended up as a number on a spreadsheet in the Department of Agriculture.
-latimes.com

Apparently it no longer made economic sense for the government to maintain a strategic reserve of food (grain) for the nation.

The reason I’m pointing this out to you is, first, to let you know that there apparently is no significant buffer like there used to be. Second, it’s another example how globalization has affected our own self-reliance as a nation. We’ve not only lost most of our manufacturing base to China and elsewhere, we’ve also given up on a national insurance policy of grain ‘reserves’…

That leaves it up to you to store your own reserves. Should the supply and/or distribution of grains (or any food) be disrupted by natural or man-made circumstances, the government will not be able to take care of you. YOU must take care of YOU.

Here’s an idea… Learn how to mill your own flour from wheat. It is NOT difficult.

Learn how to make your own bread from that flour. It is NOT difficult.

Procure your own supply of wheat. It is NOT difficult.

Note: My experience has proven that you can make approximately 25 ‘typical’ size loaves of bread from wheat stored in one 5-gallon bucket. Do the math and figure out how much you need for your own home food storage.

How Much Wheat In A 5-Gallon Bucket? – Pounds, Calories, #Loaves Of Bread