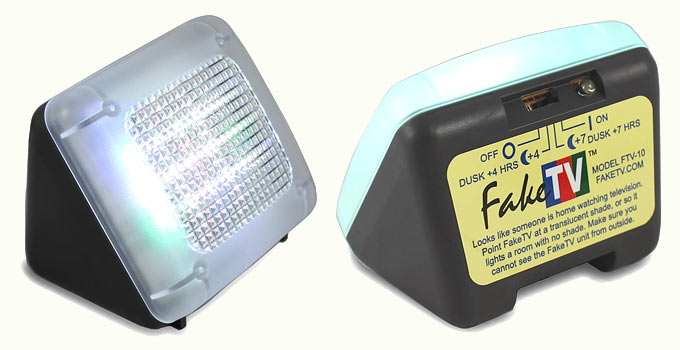 A Fake television is an effective burglar deterrent! It’s even more effective than ordinary lights that are on a timer, in my opinion. Here’s why I like the ‘FakeTV‘ product. And explanation how it works.

This is the FakeTV that I bought. I’ve had it for a number of years. I can report that it has held up perfectly, and is still functional today.

Actually, the following is their current model since I purchased mine:

As viewed from the outside at night, a TV appears as a flickering shimmer of light, colors, and hues against a window, shade, or curtain.

Burglars are opportunists. The typical home burglar looking for a vacant home to burglarize will likely move on when they believe that someone is home.

Tip: Outdoor motion lights!
(Here’s my review on what I believe is the best choice.)

If you are going away on vacation or for any extended period of time, a fake TV light like the one shown below will serve as an excellent deterrent.

If you are away from home for awhile on a trip or vacation, in addition to setting up a few lights on timers for the evening, the illusion of a TV turned on will add a very real appearance that someone is home – adding an additional layer of security.

This Fake TV light is a device that simulates a TV by producing realistic random patterns of flickering light. It simply plugs in to a wall outlet. Or you might connect it to a 24 hour timer programmed for the evening hours.

The emitted light is realistic in that it’s sourced from multicolored LED’s located behind prism lenses. The combination emits the unique diffused patterns of light into the room. It reflects off the walls, ceiling, and windows which enhances the effects.

The randomness of the flickering is very similar to that of a real TV. The intensity changes, the color and hue changes, and the random speed at which it flickers is similar to scene changes on TV – some rapid, some slower.

– always on
– a light sensor which detects when it is getting dark in the room
– It can be set to run for 4-hours, 7-hours, or after dusk.

I personally prefer the ‘always-on’ setting while plugging the power supply adapter into a 24-hour timer which I program for specific hours of operation.

If you’re looking for an additional layer of home security while you’re away from home, consider the Fake TV Burglar Deterrent.

Home security and burglar deterrence should be thought of in ‘layers’.

In addition to burglar deterrents such as outdoor motion lights, security stickers & placards, deadbolts, bump-proof locks, long screws in your door strike-plate, an x-large dog bowl on the front porch, a real or fake security camera, etc., consider what the INSIDE of your home looks like as viewed from the OUTSIDE to a potential burglar. Thus, the FakeTV!

[ Read: Key-Bumping Used By Burglars To Break Into Your Home ]