NILU, Norwegian Institute for Air Research, had been providing regular updated maps using their unique methodology to forecast various types of radiation emitting from the Fukushima Daiichi nuclear power plant in Japan as it enters the atmosphere and travels around the globe.

The public updates have apparently ceased. The following message is displayed on some of their pages that I’ve browsed from older links…

Our apologies…
The item you requested does not exist on this server or cannot be served.

About NILU:
NILU 181 scientists, engineers and technicians carry out projects for the Research Council, for industry, both in Norway and offshore, and for local and state governments at home and abroad. NILU also takes an active part in EU research programs. NILU is among the leading research groups in the world in parts of their field.

Explanation regarding their modeling:
Weather conditions play an important role in the spread of air pollution. The path the pollution takes is determined by wind direction. The dilution depends on the wind strength and luftmassens mixing process. These factors in turn influenced by the topography which channels the wind, which affects the dilution in the atmosphere. Vertical exchanges are affected by radiation conditions, and the outer wind.

The development of numerical weather prediction models combined with measurements at the ground has led to better procedures for the preparation of the wind field. Wind fields are important input to diffusion models.

The combination of meteorological models and dispersion models have provided opportunities to establish notification procedures for the dissemination of air pollution in urban and regional scale.

Regarding the accuracy or validity of the NILU models that they have published of I-131, Cs-137 and others, I cannot say. It would be curious to hear Arnie Gundersen’s opinion on this.

In any event, a few blogs out there have uncovered a file folder location at the NILU site which still contains apparent updates, however they are not published publicly. I do not see a copyright notice. That, combined with their previous free distribution of their charts, I have chosen to post their latest available charts while knowing that many Readers here are interested in this subject.

The data is quoted in Bq, or becquerel (pronounced: ‘be-kə-rel) per square meter. One Bq is defined as the activity of a quantity of radioactive material in which one nucleus decays per second. One becquerel is one disintegration per second and is an extremely small amount of radioactivity. When measuring radioactivity of a sample with a detector, a unit of “counts per second” (cps) or “counts per minute” (cpm) is often used. These units can be converted to the absolute activity of the sample in Bq if one applies a number of conversions.

Arnie Gundersen of Fairewinds Associate Inc., has provided several video-opinion updates regarding the Fukushima-Japan nuclear power plant disaster. Given his credentials (listed below), his practical and straight-forward demeanor, I find it beneficial to hear what he has to say. So much so that I’m writing this short post regarding his most recent update that he… 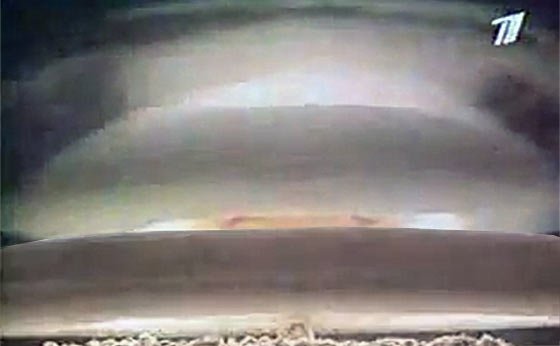 Type: Thermonuclear weapon Place of origin: Soviet Union Blast yield: 50-58 megatons (TNT) (scroll down for video)   About the Tsar Bomba The Russian Tsar Bomba was the most powerful nuclear weapon detonation in the history of mankind. The following video is original footage of the detonation.   The Tsar Bomba detonated 2 miles above…

credit: NBC BAY AREA Responding to a question regarding the appropriateness of the opening of the California Joint Emergency Operations Center in response to the radiation leak in Japan, U.S. Surgeon General Regina Benjamin said today in San Francisco, “We have to be prepared”. She went on to say, “…but if we don’t need them,…